We made our way through Canada in record time on this trip. We liked this marker for Mile “0” on the Alaska Highway that was right in the middle of the street in Dawson Creek.

The mountains around the Banff/Jasper area are impressive!

Last year, we planned out each day of our trip and knew where we were going to stay each night. This year, we completely winged it and found ourselves driving through some long days and staying in different places. We crossed the border and found ourselves exhausted but pleased that we had pushed on so hard to get back to the lower 48.

We spent a few days in Coeur d’Alene just resting, cleaning the trailer and restocking the pantry. Last fall, we volunteered at Dworshak Dam in Orofino ID and that was our next stop. We visited with Penny and Virgil, super volunteers that return to Dworshak every summer and Rangers Deb and Starsky joined us around the campfire for wine and snacks. The wild turkeys still visit every night for their corn kernels and this year the deer have been stopping by each evening.

Our next stop was McCall ID, once again a beautiful resort area that we get to enjoy. Friends Joan and Mel just built a new cabin (most would call it a big house!) and we got to see all that they had done and enjoy dinner with them. This is Payette Lake, right in the heart of McCall. 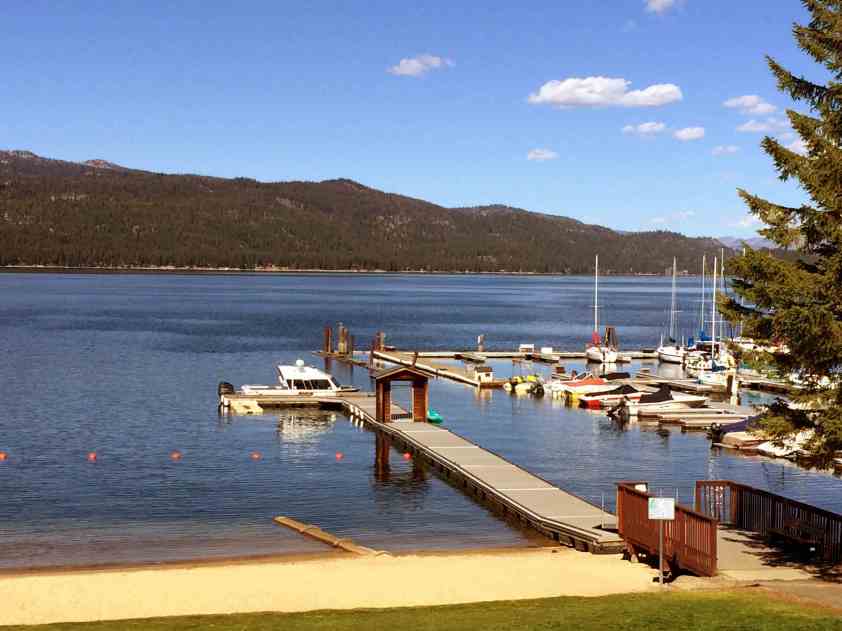 Our next stop will be Boise to spend time with family. My mom is living in a memory care facility with my sister Deb and her husband Mike taking care of her. My brother Jim and his wife Jeanette are flying up from Denver to join us on this visit. We will stay in Boise until Sunday and then head for Salt Lake to party with Dava and Tom before we head across WY and home to Colorado!

We are spending the night in Fort Nelson BC and surprising news, we have wifi! All kinds of prizes and accolades to the person who invents a wifi system for people like us – living in a 5th wheel trailer and moving around Alaska, Canada and the lower 48 states. We struggle with being so dependent upon wifi and cell coverage but it really does keep us connected to all of you! We have eliminated most snail mail so really, having good reliable, safe wifi is important!

We had a full day of driving through beautiful British Columbia. The forests are so dense with trees, the rivers wide with very cold looking rushing waters, and the animals seem to own the land as they are everywhere. We saw herds of bison along the road, a few black bears scurrying away from the road and a couple of caribou just standing beside the road. 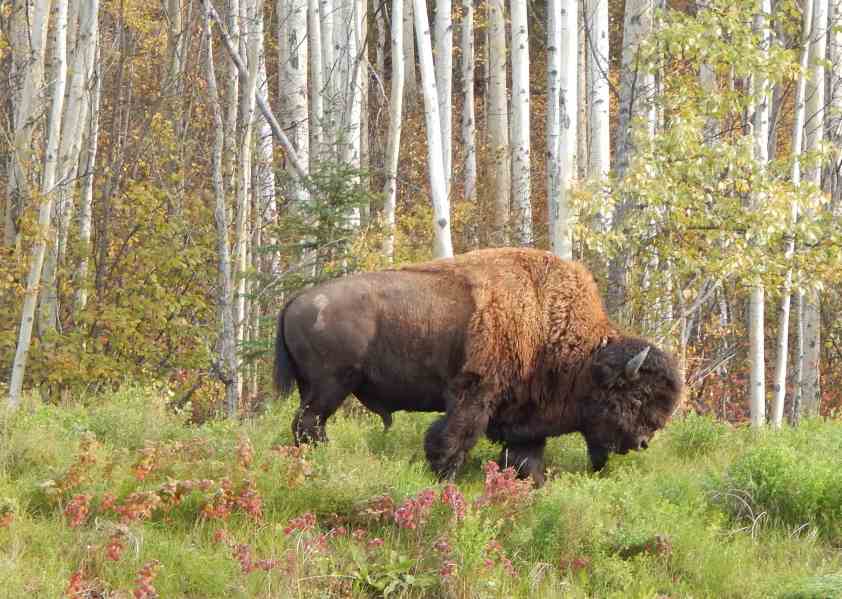 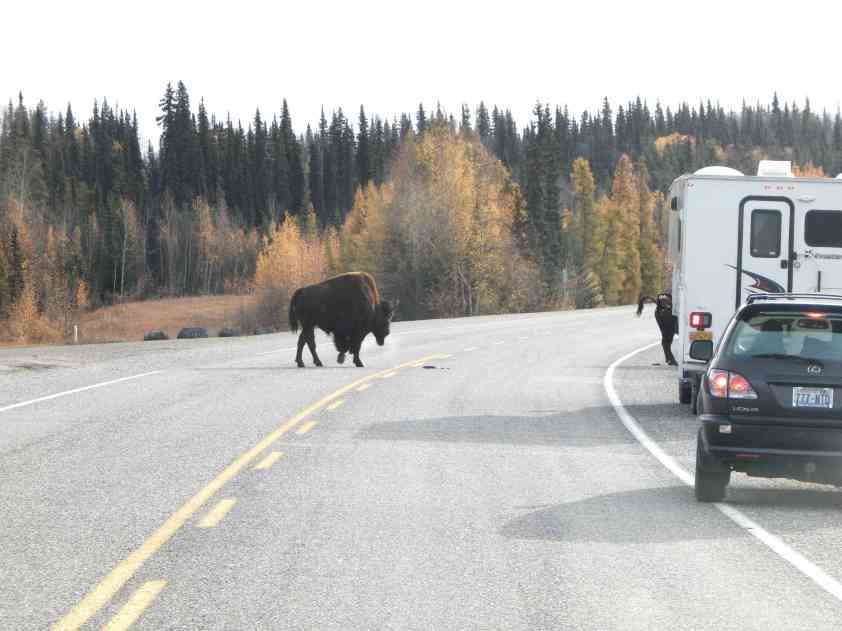 I am quite sure the caption here should be “Pay attention while driving!” We head out in the morning for Dawson Creek  – more beautiful scenery and more animals!

We love Alaska! We had another great summer exploring the interior of the state, well one tiny little bit of the interior of this huge state. There is nothing like this state – it is bigger than life, the play toys are bigger than they are in the lower 48 and the people here are living out their dreams and living off the land and the water. It seems that everyone hunts, fishes and has 2-3 home freezers full of meat and fish!

Cliff has done well with his physical therapy for getting his shoulder back in shape after having rotator cuff surgery. He will continue doing physical therapy until the end of the year so he still has work to do. We said goodbye to our friends at the Chena Flood Project, packed up the trailer and headed out on Friday morning. With snow in the forecast for Fairbanks for the weekend, we timed our departure just right.

Winter has arrived in Fairbanks. As we travelled south we found fall again and trees that still had their leaves in full fall colors. 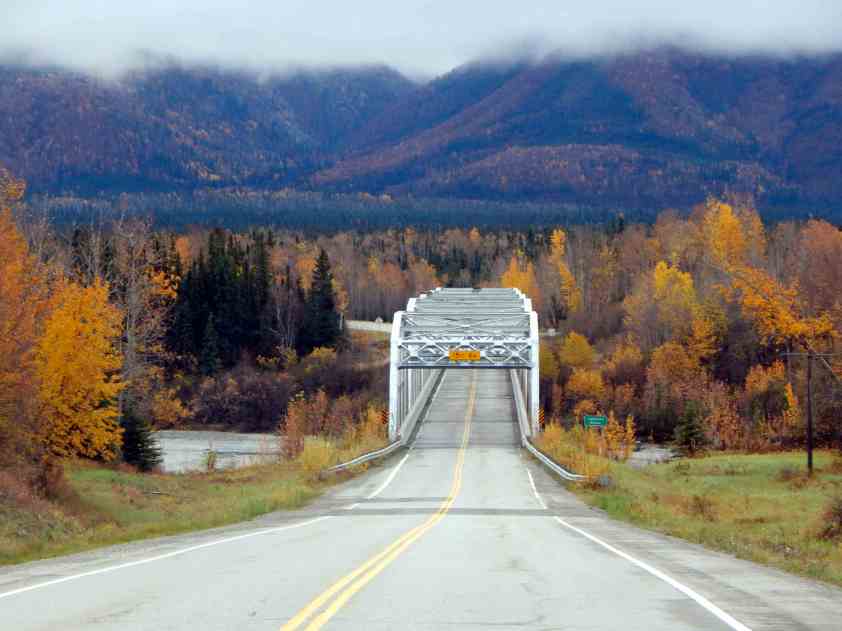 We also ran into into rain, snow, slush and the worst roads ever.

It is hard to say goodbye to Alaska so we won’t, we will just say, see you next year!

Labor Day, end of summer BBQ’s and thoughts start to turn to fall. Well for most of you in the lower 48 that is true but up here in Alaska, fall showed up in mid-August and Labor Day is just about the end of fall with winter close behind. The trees have already turned color and are losing their leaves; it is crisp at night and has been down into the 30’s. The Rangers tell us that fall lasts about 2 weeks here in Fairbanks but it is spectacular!

Jake and Cole took us on an adventure to celebrate Labor Day. We traveled north in our ATVs called Rangers to an observation lookout where we could see the floodway on one side and the river on the other. The Rangers are incredible little machines getting us up and down the trails and the human Rangers are just as incredible as they hop out and shove down trees, move logs out of the way and generally rearrange the forest for us to get through. It was quite the ride!

The picture above is Jake, Cliff and Cole standing at the top of the mountain. The picture below is the view of the river right behind where they were standing. 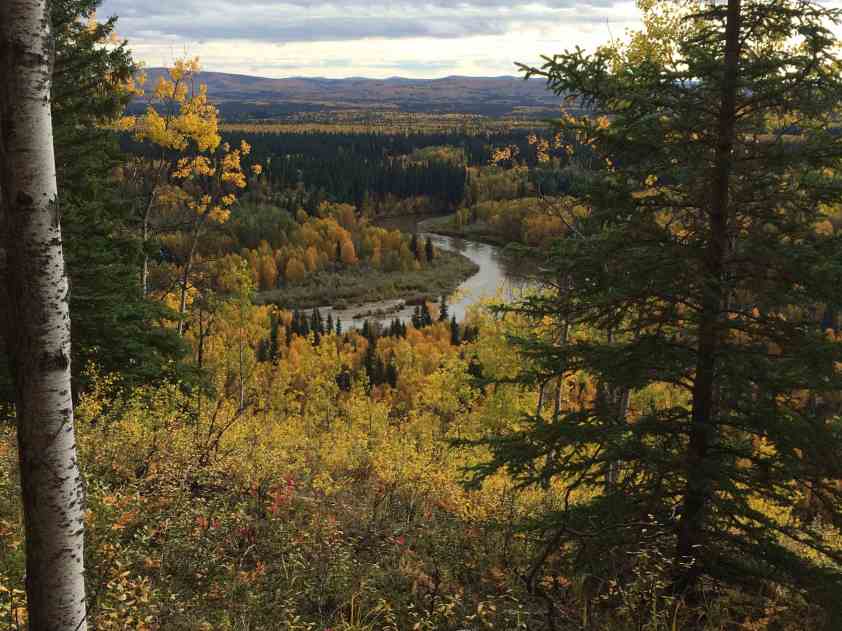 We continued our travels to North Pond, a favorite place to hang out or do a little fishing. We have enjoyed eating several rainbow trout that once lived here! The water was so quiet and we liked how that made for good tree reflections in the water. 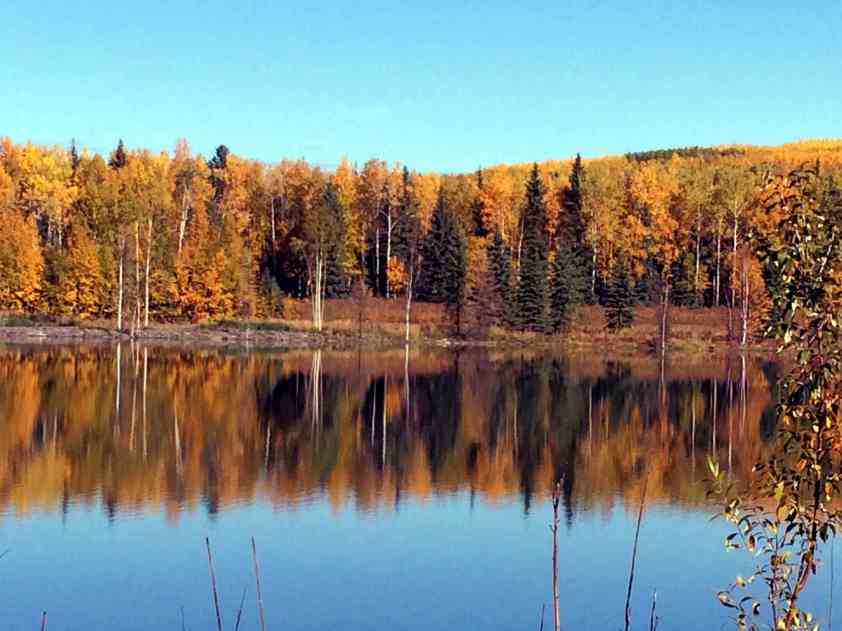 We came across this group of trees and with the sunlight pouring in it just looked beautiful. 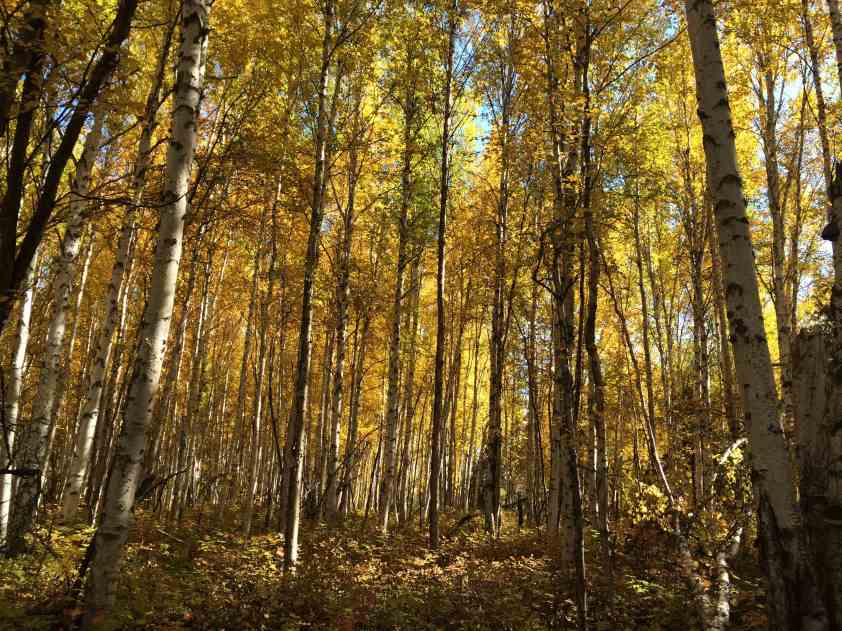 As we headed home we went over the top of the dam and caught a glimpse of the debris field. This is the wood that floated downriver during the flood event and with the dam gates down the debris backed up at the dam. Heavy equipment was brought in and they worked for 2 days to clear the debris. The wood will now be used for firewood and barriers around the project. 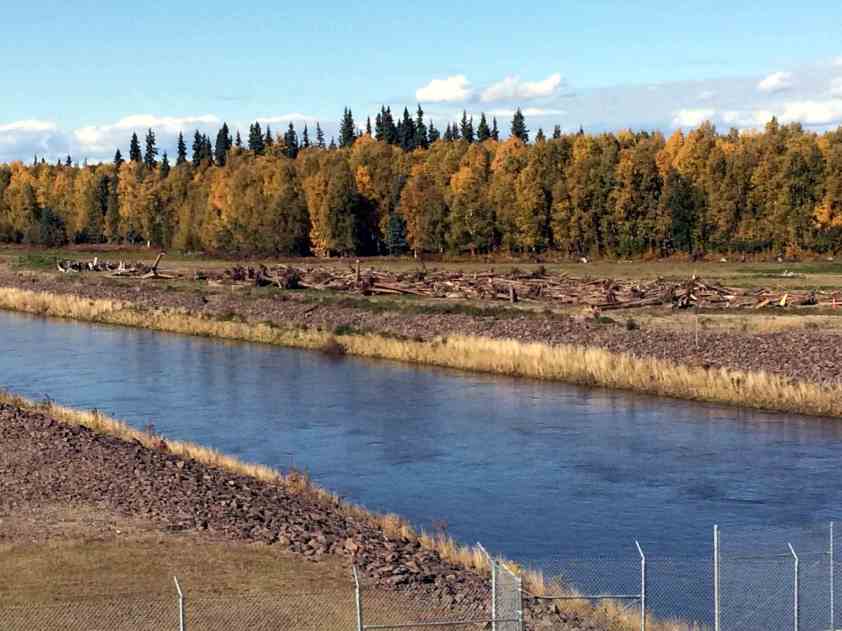 What’s Up? Cliff is recovering from his shoulder surgery, going to physical therapy 3 times a week and doing his exercises 3 times a day at home. He is working on gaining strength but at the pace his doctors have set. He is behaving (mostly) but I do catch him at times putting too much angle on his arm when he lifts it. He meets with the surgeon on Sept. 17 and we expect he will be released. He will need to be careful but we should be able to start our trip home.

In the meantime, we are looking like tourists while visiting the Museum of the North, an antique car museum and a large animal research center. Still on our list is to visit the Santa Claus House so expect a full report when we do!